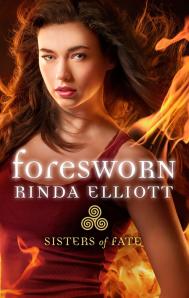 It is written that three Sisters of Fate have the power to change the world’s destiny.

But only if they survive…

Kat Lockwood grew up listening to her unhinged mother’s stories about the Norse goddess souls she and her triplet sisters carry, about fiery deaths and a prophecy foretelling the world’s end. Now, to save that world, Kat must find a guy who hosts the soul of a Norse god–a warrior with the lightest blond hair and the darkest brown eyes.

But at a truck stop on her road trip, Kat freezes time while she writes out a cryptic message in runes. The only other person able to see this happen? A gorgeous guy with the lightest blond hair and the darkest brown eyes.

Kat’s not convinced peaceful Arun is the future warrior who will turn the tide in the final battle. Yet, Arun turns out to be a lot tougher than he seems. As soul-carrying teens and underworld creatures gather over the world’s deadliest volcano, Kat finds that no one, including her sisters and mother, is exactly who she thought they were….

The prophecy doesn’t lie: one is doomed to die.

You can pre-order FORESWORN these places:

Writer.I love unusual stories and credit growing up in a family of curious life-lovers who moved all over the country. Books and movies full of fantasy, science fiction and romance kept us amused, especially in some of the stranger places. For years, I tried to separate my darker side with my humorous and romantic one. I published short fiction, but things really started happening when I gave in and mixed it up. When not lost in fiction, I love making wine, collecting music, gaming and spending time with my husband and two children. I’m represented by Miriam Kriss of the Irene Goodman Agency.
View all posts by Rinda Elliott →
This entry was posted in My Writing Life. Bookmark the permalink.